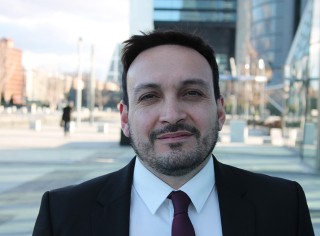 Partner of the Public Policy & Digital Economy and Head of LatAm Desk at ECIJA. With a clear international profile, Franz Ruz is a highly regarded expert in Intellectual Property, Entertainment and Technology Law, and internationalization of companies in the TMT sector in Latin America. Franz Ruz has more than 10 years of experience as a legal advisor and strategic consultant to companies in the technology, creative and media industries, and governments, international agencies and commercial associations.

He has directed and coordinated one of the major independent studies commissioned by Google in Europe (‘The Future of copyright and content generated by users’, 2011) and has been advisor to the Ministry of Culture of Chile in the design of its film policy on audiences (2013-2014). He has also been director of the Legal Guide to Film Financing in Spain (Instituto Author, 2010), and co-director of the White Paper Animation in Spain (2012).

He has worked as a consultant for United Nations (CEPAL) for the Open Data for Development project (2013) in Latin America and the Caribbean, and collaborated with theWorld Intellectual Property Organization (WIPO) as International Speaker in National Workshops in Eastern Europe. He has been asked to give his expert opinion by theSpanish House of Representatives (2010) and the Republic of Chile (2013) on legislative processes in intellectual property; and by the Inter-American Development Bank(2013) as International Speaker on Global Services.

As a strategic consultant Franz Ruz has worked on projects at the Spanish Institute for Foreign Trade (ICEX), Ministry of Industry, Spain, related to internationalization and Digital Economy. He is co-author of the Handbook of Electronic Commerce (2013) and Report on Opportunities of International Digital Distribution for the Editorial sector (2012) published by this organization. He has also been a consultant on projects of the Ministry of Industry, Spain, on open source software (2009).

He has been Director of the legal module on the course about Creative, Business and Legal matters in Animation at IBERMEDIA (Madrid, 2013) focused on media co-production between LatAm and Iberia.

Member of the Madrid Bar Association.