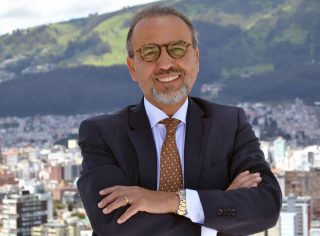 Gonzalo began his career as a lawyer in 1985. He is a specialist in oil, gas, electricity, tax, public procurement, contract negotiation and national and international arbitration law.

He has completed several national and international courses and seminars, has been a university professor, author and co-author of various research papers, reforms and new legal bodies in the energy branch.

He was in charge of preparing the regulatory framework and legal framework for the Seventh Oil Round. He was a Consultant member and participant in the Commission for the elaboration of the reforms to the Hydrocarbons Law, member of the Commission appointed by the Minister of Energy and Mines and the World Bank to prepare the legal framework for modernization in the handling of the Commercialization of derivatives and operation of pipelines and terminals. (1995).

He has participated as an Advisory Lawyer in important projects within the tenders called by the electricity and oil sector.

Member of the AIPN Board of Directors. Board member and vice president of the Quito Chamber of Commerce (2004-2010). President of the Arbitration and Mediation Center of the Quito Chamber of Commerce and Arbitrator of said center and Member and President of the Commission on Arbitration and Alternative Dispute Resolution Methods (ADR) of the ICC Chapter Ecuador. External and internal lawyer of several national and international oil companies, currently chairs the Petroleum Commission of Ecuador, free exercise of the profession of lawyer, in the branches of National and International Arbitration, Public Procurement, Natural Resources, Oil and Gas.

• Ecuadorian Petroleum State Corporation and PETROECUADOR, attorney for the attorney general and international trade, member of the procurement and contracting committees of CEPE, head of the advisory division, head of the contracts division, director of contracts, assistant manager and Head of the Legal Unit.
• Attorney General of PETROCOMERCIAL.
• Assistant and advisor to the Executive President of PETROECUADOR.
• Lawyer adviser on important projects within the tenders called by the electricity and oil sector.
• Board member and vice president of the Quito Chamber of Commerce (2004-2007).
• Vice President of the Chamber of Commerce of Quito
• Arbitrator of the Center of Arbitration and Mediation Chamber of Commerce of Quito
• ADR Commission President, ICC Ecuador Chapter

• Decoration awarded by the National Labor Council, as an integral member of said Council representing the Chambers of Production-2005-2006
• Decoration awarded by the Quito Chamber of Commerce for outstanding services to the Community. 2014
• Board member of the AIPN (Association of Petroleum Negotiators) 2016-2018 (election).
• President of the ADR Commission of the International Chamber of Commerce – Ecuador Chapter.