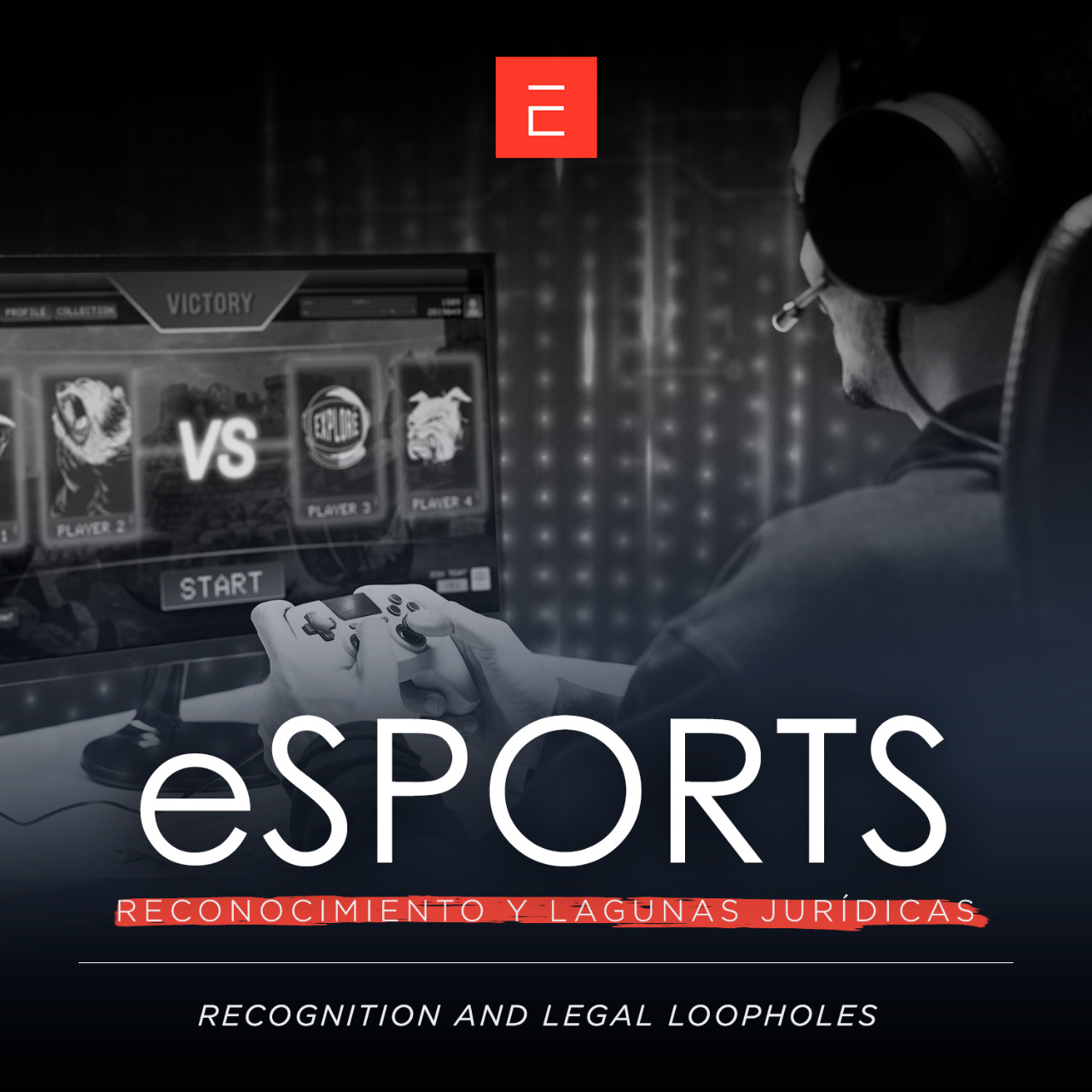 Can esports be legally considered a sport in Mexico, just like soccer, boxing, basketball, motor racing or archery?

Entertainment, sports, and technology are of utmost importance for today’s society, since these three sectors generate many jobs and income worldwide. In Mexico, the National Institute of Statistics and Geography (INEGI), reported that in the first quarter of 2022, the sector of cultural and sports entertainment services and other recreational services registered a Gross Domestic Product (GDP) of 92.13 billion Mexican pesos, which represents 4.3% quarterly growth, and 72.4% yearly growth. According to INEGI, Soccer in Mexico generates 193,200 jobs with a salary income of 25.3 billion Mexican pesos per year. Comparatively, video games, specifically esports, could surpass the combination of these three sectors.

While it is true that video games have had a large growth year-over-year, since the advent of video games, esports redefined the way people view, follo and practice video gaming and/or sports. The latest report from the consulting firm Newzoo states that 2022 will close with nearly 261 million esports enthusiasts worldwide, 8.8% more than last year, and that this figure will exceed 318 million in 2025. Before becoming the multi-million-dollar business it is today, with large brands betting on its future, and even considered by many as sports, video games and esports had a gradual start, beginning with the organization of competitions as well as the professionalization of gamers.

Determining which was the first video game of all has undoubtedly been controversial, mainly due to the multiple definitions that have been established. However, there is a consensus that Nought and Crosses, also called OXO, developed by Alexander S. Douglas in 1952, can be considered as the first video game. The video game was a computerized version of tic-tac-toe and pitted a human player against a machine.

During the nineties, several international tournaments emerged with greater professionalization, for example, the Nintendo World Championship or the Cyberathlete Professional League (CPL), being the CPL, the first organization dedicated to the realization of video game tournaments, nowadays known as esports.

In 2000, South Korea began licensing professional esports players. Meanwhile, around the world, the number of competitions created grew. In 2007, esports reached mass audiences, the Championship Gaming Series in 2007 was the first major event broadcast on television in three countries: USA, China, and UK. In 2010 a league was broadcast for the first time via streaming (such as Twitch, Facebook Gaming, YouTube Gaming, etc.), which it is the current main format of esports.

Undoubtedly, a turning point in esports was the launch in 2009 of League of Legends (LoL), the maximum exponent of electronic sports. LoL and other video games such as MOBA (Multiplayer Online Battle Arena) generated exponential growth. Many game publishers began to organize their own leagues or competitions, for example, The International Dota 2 Championship, Call of Duty Championship, and the League of Legends World Championships.

In this regard, it is important to define what is meant with the term sport. Therefore, taking as a basis the Spanish Royal Academy of Language, sport is defined as “physical activity, exercised as a game or competition, the practice of which involves training and submission to rules, as well as recreation, pastime, pleasure, amusement or physical exercise, usually outdoors”.

On the other hand, different authors, philosophers and sociologists have made different definitions of sport, among them Manuel García Ferrando, José Hernández Moreno, Francisco Javier Castejón Oliva, and José María Cagigal. The latter pointed out that sport is not a univocal term, since for Cagigal there are different forms of sports such as: school sports, recreational sports, initiation sports, adapted sports, among others. However, all types of sports can be framed in 2 orientations: spectacle – sports and practice or sports for all.

Considering the different authors’ definitions, it is important to mention Bouet, who gave the first classification of sport and divided it into 5 disciplines: combat sports, ball sports, athletic and/or gymnastic sports, sports in nature and mechanical sports. Mechanical sports are characterized by the use of machines, which generate the energy and that are controlled and directed by humans. In this last classification, esports could be included.

Given this, it is worth asking whether in Mexico, legally speaking, can esports be considered a sport? From a legal point of view, the definition of sport is found in the General Law of Physical Culture and Sport (LGCFD), which in Article 5 establishes and defines sport as physical activity, organized, and regulated, whose purpose is to preserve and improve physical and mental health, social, ethical, and intellectual development, with the achievement of results in competitions.

From the above definition, it could be elucidated that esports comply with each of the characteristics that make up the sport’s legal definition, in accordance with the following:

Furthermore, according to the study Do E-Athletes Move? A Study on Training and Physical Exercise in Elite E-Sports, conducted by Tuomas Kari and Veli-Mattiy Karhulahti published in the International Journal of Gaming and Computer-Mediated Simulations, taking as a sample 115 elite e-athletes, they train approximately 5.28 hours every day throughout the year at the elite level. Approximately 1.08 hours of that training is physical exercise. More than half (55.6%) of elite e-athletes believe that integrating physical exercise into their training programs has a positive effect on e-sports performance. However, no less than 47.0% of elite e-athletes perform their physical exercise primarily to maintain general health. Consequently, the study indicates that elite e-athletes are also active athletes, those over 18 years of age exercise more than three times the daily activity recommendation of 21 minutes given by the World Health Organization.

Although esports are a more mental sport in which the mind and intellect are developed, the physical issue is important, from the sitting posture at the time of playing, as well as the care of the muscles and bones of the hands. Esports also help in social development, since players live with their own teammates to develop better teamwork at the time of competition, better chemistry, and, like any sport, the ethical issue is of utmost importance. In this regard, esports generate respect for the rival, discipline and there are sanctions in case a gamer violates the competition rules.

It is important to mention that the National Commission of Physical Culture and Sports (CONADE), the highest sports body in Mexico with respect to federated sports, in February 2019, recognized, approved, and endorsed the Mexican Federation of eSports (FEMES) as a National Sports Federation. Likewise, it was granted its Single Sport Registration, i.e. Registro Único del Deporte (RUD), which means that CONADE has already recognized esports as an official sport. At the international level, other esports organizations such as CONCECARES, the Internation eSports Federation (IeSF) and WESCO have also been recognized.

The importance of esports being recognized as a sport in Mexico relies in beginning treating gamers as professional athletes (as is done with basketball players, boxers, and soccer players). This would allow them to be included in Chapter X of the Federal Labor Law, which rules professional athletes; or else develop a special chapter within such legislation, in addition to the legal regulation of the labor aspects derived from esports.

However, it is important to highlight that, unlike traditional sports, such as soccer, athletics, swimming, among others, the most important esports events are not organized by International or National Federations, but by the creators of the video games, i.e. publishers, which leads to legal loopholes in many aspects. For instance, in the transfer of players from one team to another, the difference of the minimum compensation in one esport to another, doping, sanctions, eligibility and the treatment of underage players.

Finally, we can conclude that professionalizing esports in Mexico in all aspects is vital for their expansion as in other regions. This includes player relations (since in many occasions players face unfavorable contracts or ambiguous legal constructs), immigration issues, regulations, creation of companies (many of them as Simplified Joint Stock Companies) or even teams without being incorporated as a company, leagues, and undoubtedly there is a need for greater legal certainty within the esports ecosystem in Mexico.