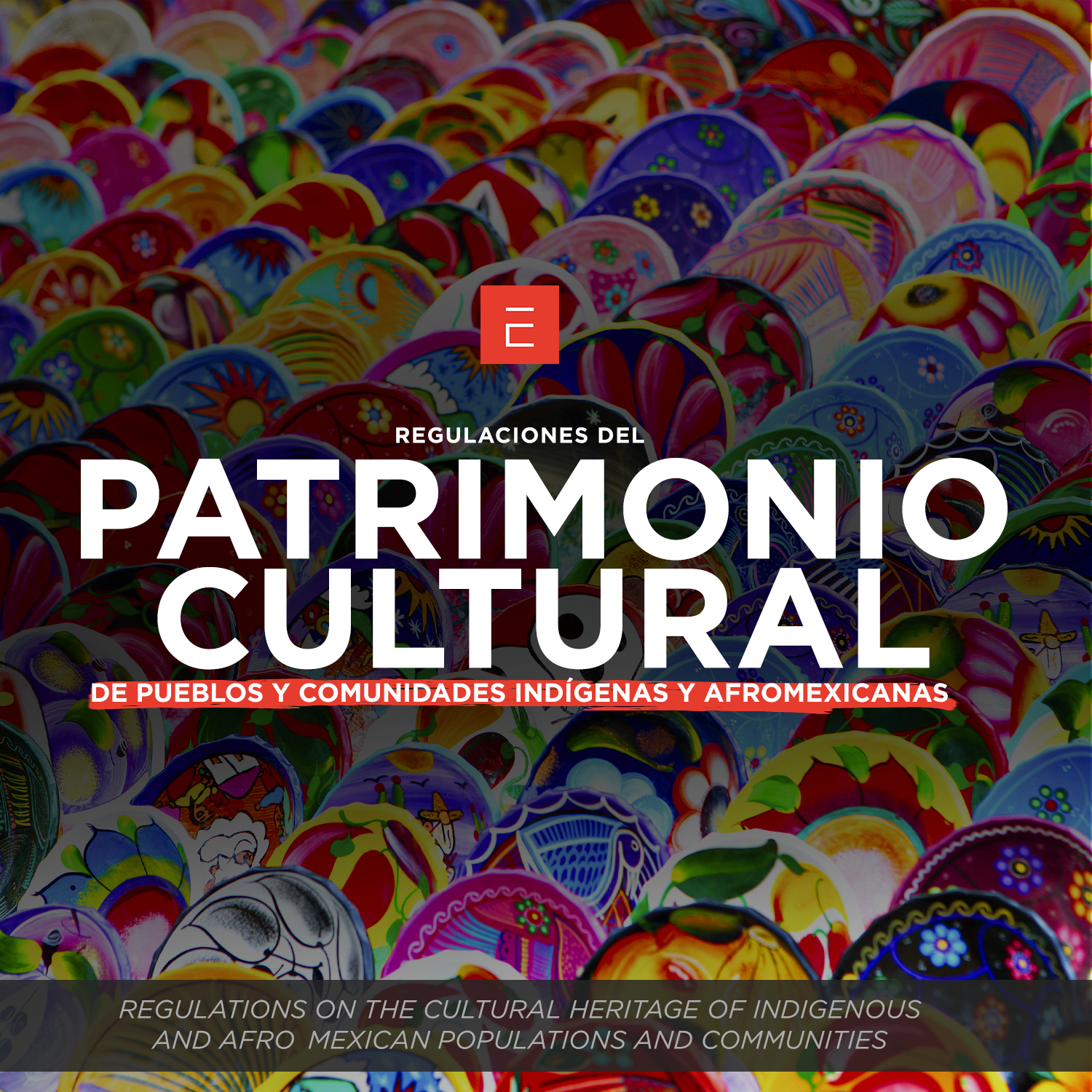 Regulations on the Cultural Heritage of Indigenous and Afro- Mexican Populations and Communities: Considerations for Companies

On January 17th, 2022, the decree issuing the General Law for the Protection of the Cultural Heritage of Indigenous and Afro-Mexican Populations and Communities was published in the Mexican Federal Official Gazette. Its purpose is to acknowledge and guarantee the protection, safeguarding and development of cultural heritage and collective intellectual property.

Mexico is a multiethnic and multicultural country with at least 7 million people that speak an indigenous language, more than 2 million Afro-Mexicans and 68 indigenous groups identified in the 2020 Population and Housing Census[1].

Nevertheless, the lack of legal and social recognition of indigenous and Afro-Mexican populations and communities has meant that, for years, multinational companies, mainly in the fashion industry, have abused their cultural heritage, profiting unduly by launching identical or similar products on the market at high costs. As response to the lack of penalties for these actions and to Mexico’s international commitments, the General Law for the Protection of the Cultural Heritage of Indigenous and Afro-Mexican Populations and Communities (the “Cultural Heritage Law”) has been enacted. The law incorporates for the first time, into Mexican legal framework, a mechanism for its recognition and protection.

In this regard, it should be noted that the Convention for the protection of the world cultural and natural heritage recognizes in its Article 4, the obligation of the States Parties, as is the case of Mexico, to identify, protect, conserve, rehabilitate and transmit to future generations the cultural and natural heritage located in its territory, giving international support to the recently enacted Cultural Heritage Law.

However, although a law to protect these groups in vulnerable situations was necessary, it is questionable whether, in the creation of this new law, the recognition of the self-determination and autonomy of the populations and communities has been respected. Furthermore, there are several ambiguities in the law itself, a situation that leads us to question the efficiency and effectiveness of the new regulatory instrument.

In this regard, from ECIJA Mexico, we have prepared a brief analysis on the pending issues of such regulation, as well as considerations that every company should keep in mind.

Key aspects of the regulations for companies

The regulations define heritage as the set of tangible and intangible assets comprising languages, knowledge, objects, and all elements that constitute the cultures and territories of the indigenous and Afro-Mexican peoples and communities, which give them a sense of a community with their own identity and perceived by others as characteristic, to which they have the full right of ownership, access, participation, practice, and enjoyment in an active and creative manner.

It also recognizes traditional knowledge and cultural expressions, as well as manifestations associated with them. This law foresees a series of tangible and intangible elements corresponding to cultural heritage that might not be clear, since other international instruments such as the Convention on the Protection and Promotion of the Diversity of Cultural Expressions focuses on any form in which the culture of groups and societies are expressed. Thus, it could be considered that the concept provided by the Mexican law is quite broad, since it does not refer to the most important protected legal right, which is the sense of belonging and expression intrinsic in the elements of cultural heritage.

On the other hand, these mentioned elements could have such antiquity, that they could constitute an exception to the public domain rule established in the Federal Copyright Law. It is worth remembering that the public domain rule establishes that economic rights of any work will be effective during the author’s lifetime, plus one hundred years after his/her passing. In this regard, it is presumed that the legal nature of cultural heritage is different from that of industrial property and copyrights as we currently know them, since it violates the basic principles of both branches of intellectual property.

It is worth mentioning that this concept may not be accurate or the most appropriate, since it allows interpreting that there is a legit or fair appropriation. Thus, it would have been more accurate if, perhaps, the Cultural Heritage Law had referred to the term “cultural appreciation” and not to “misappropriation”, to avoid this type of confusion that might have adverse effects for the communities. Likewise, such concept is equated to a penalized activity in terms of the Cultural Heritage Law.

The Cultural Heritage Law establishes the right of indigenous and Afro-Mexican populations and communities to enter into contracts with third parties regarding the use, exploitation and/or commercialization of elements of their cultural heritage through a fair and equitable retribution and distribution, considering null and void those agreements signed by an individual member with respect to the assets of his/her whole population and community, and mediating a consultation process (which, although necessary, is poorly regulated since it does not establish clear criteria for its process and that refers to regulatory instruments of pending enactment).

It should be noted that, between communities, peoples and companies, abusive contracting conditions may occur. Therefore, mechanisms should have been established to safeguard against these circumstances or to provide free legal assistance by the National Institute of Indigenous Populations. However, this is not provided in the Cultural Heritage Law.

The law incorporates the right to always claim the collective property when third parties use, benefit from, commercialize, exploit, or unduly appropriate elements of its cultural heritage, including reproductions, copies, or imitations, even to a confusing degree, without its free, prior, and informed consent, as well as when a third party performs acts that are detrimental to the cultural integrity and dignity.

Said right shall be processed through mediation, complaint, or denunciation before the National Copyright Institute (“INDAUTOR”). The Institute will decide whether the precautionary measures of withdrawal from circulation, sale, public exhibition or making available on electronic media, the prohibition of the sale or seizure of the goods in question, or the suspension of activities or closure of establishments are applicable. Regardless of the restitution, payment, compensation, replacement, or repair of damages.

In this regard, it should be noted that the resolution authority is INDAUTOR. As already mentioned,

cultural heritage is considered under the law as collective property of the indigenous and Afro-Mexican populations and communities. This figure has a different legal nature from copyright law, in which INDAUTOR specializes, and from industrial property law, which is regulated by the Mexican Institute of Industrial Property (“IMPI”), and thereby affecting the basic principles of these law areas.

According to the foregoing, it is questionable whether the appropriate resolution authority would be the one specialized in cultural heritage, such as the National Register of Cultural Heritage of Indigenous and Afro-Mexican Communities, which will be addressed below, in which the IMPI and the INDAUTOR will being participation in any controversy, according to the nature of the element of cultural heritage in dispute.

The purpose of this system is to establish a collaboration mechanism between the Federal Government and indigenous and Afro-Mexican populations and communities. It is debatable whether it is appropriate to focus on entities specialized in the generation of public policies, or whether the intellectual property authorities (INDAUTOR and IMPI) should have a place at the table.

The purpose of this Register is to allow indigenous populations and communities, as well as Afro-Mexicans, to register the elements of their cultural heritage at any time by providing the corresponding documentary evidence.

This encourages the registration, documentation and identification of the elements belonging to cultural heritage of any community or population, which will be useful in the event of any dispute. However, it should be noted that it will be indispensable for the authority in charge of such registry to homogenize its criteria with previous instruments, such as the Register of Cultural Property of the National Institute of Anthropology and History (“INAH”) and the Inventory of Intangible Cultural Heritage of the Ministry of Culture, in order to guarantee its functionality.

The Cultural Heritage Law implements a new sanctioning regime in this area, providing the following measures:

Undoubtedly, the law is not clear in relation to the types of infractions mentioned above, lending itself to interpretation, which can be problematic in the case of penalties that are not only administrative, but also criminal.

Although this protection mechanism of cultural heritage of Indigenous and Afro-Mexican populations and communities is a step forward, such an inhibiting sanctioning regime can be adverse. This is because it runs the risk of discouraging the promotion and dissemination of indigenous and Afro-Mexican creations, aggravating their situation of vulnerability. Furthermore, their fair and necessary retribution is no longer guaranteed by not providing assistance and protection to the collective against potential abuses by multinationals.

Considerations in light of Human Rights and ESG Criteria

The Cultural Heritage Law, in addition to joining other similar law initiatives in other countries such as Ecuador, Bolivia and Canada, represents a new paradigm considering violations of intellectual property rights as violations to human rights. The law not only incorporates a new treatment in the matter, but also adds new obligations, such as contracts with this perspective, as well as guaranteeing the right to consultation of these communities.

It should be noted that the law facilitates that the so-called “cultural appropriation”, through the “misappropriation” regime, to be taken to court with high costs for companies, especially, in those industries dedicated to manufacturing of clothing, textiles, and consumer goods in general. Therefore, new, and better mechanisms for the prevention of legal risks are required.

In this regard, “cultural appropriation” has been defined at the international level as the act of taking or using elements of a culture that is not one’s own, especially without demonstrating respect of comprehension towards it. What defines the culture of one group, by other members who possess greater privilege or power, is the unacknowledged or inappropriate adoption of ideas, practices, customs, and identity indicators[2].

The regulation and combat of this practice is not new since the UN in 2001 promoted the issuance of sanction and control instruments. In October of 2015, the High Commissioner for Human Rights of the United Nations issued the Resolution 30/53 on Promotion and Protection of the Rights of Indigenous Populations with respect to their Cultural Heritage, consisting of a study prepared by the Expert Mechanism on the Rights of Indigenous Populations, noting that the complexity and existence of various cultural heritage protection systems has fragmented them, with the consequence that cultural heritage of indigenous populations is not adequately protected, causing the failing of systems to recognize that cultural heritage of indigenous and Afro-descendant communities is holistic and encompasses spiritual, economic and social connections with their lands and territories.

The World Intellectual Property Organization (“WIPO”) also has international treaties that are particularly relevant with respect to cultural heritage of indigenous populations, three which are specifically important:

Finally, it should be noted that Mexican courts are no strangers to this debate since they have already ruled on the protection of cultural heritage in the past. In this regard, the Eighteenth Collegiate Court in Administrative matters of the First Circuit, in the Revision of Amparo 93/2019, stated that entities that have access to culture and knowledge, that assume a cultural identity or a sense of belonging to a community, can only be individuals. Therefore, legal entities, which lack corporeality, cannot be titleholders of a human right to culture and protection of cultural heritage. It completely denies companies the ability to appropriate such knowledge[3].

[3] Revision of the Amparo 93/2019. National Coordinator of Historic Monuments of the National Institute of Anthropology and History and others. February 20, 2020. Majority of votes. Available for consultation at the following link: https://bj.scjn.gob.mx/doc/tesis/X8yeI3kBNHmckC8LqIsx/%22Cultura%22%20